Mounts are fantastic creatures that allow Empire of Dream animals to travel the Way of the Stars and move from one island to another. They are magical animals with powers that allow them to walk on the ways, which other creatures of Empire of Dream can not do without painful death in space. Empire of Dream creatures are often very attached to their mounts and bond with them on their long journeys between the islands. Mounts are not slaves, they are very respected and loved beings on Empire of Dream. They can wear jewelry and decorations on the back and head, but never aggressive harnesses such as bits that enter and injure their mouths.​

New rarer mounts remain to be discovered. By owning them, you will be able to access secret islands where new mounts, companions, quests and new items can be won.
You can also play with your mounts during RP and use them to help you during quests.
The mounts must necessarily be larger than your character so that they can carry them on their back as well as some travel items. 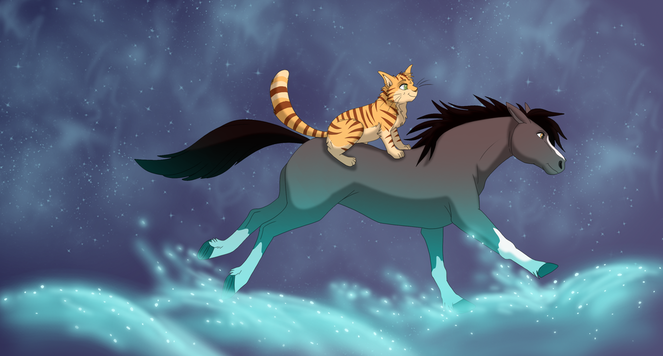 Special mounts :
These mounts are only obtained during a capture during events, quests, or on new islets and cannot be purchased.

- Wild boar and giant warthog: these rustic animals are not easy to tame, they have well-tempered characters and have made their owners fall to the ground more than once. Those living in the forest are more like ordinary wild boars, while the giant warthogs are more aggressive, imposing and massive and have a double pair of tusks.

- Aqua-horse: a magic breed of horse with fins and gills. These equines have special legs that also allow them to run on water. It can make think of Morvarc'h.

- Celestial horse: a space horse with horsehair that looks like the tail of a comet, it can also take the form of a pegasus and can have a starry coat like a summer sky.
​
- Volcanic horse: a horse with a coat that looks like rocks of a volcano, with shiny cracks looking like incandescent lava and horsehair in flames.

- Ray: these graceful animals will prefer to live in an aquatic environment. However, these creatures have the ability to fly in Empire of Dream and to walk in the sky. They are excellent mounts and are much loved for their soft personality. They will look like almost all species of rays.

- Suchomimus: an agile species and at ease in the water, it is an ideal mount for traversing the marshes of ParadisePast. Fierce, suchomimus will also protect you but will never attack you, being piscivore.

- Gallimimus: A fairly thin, large and soft dinosaur. The gallimimus is a mount that is easier to tame and capture than the suchomimus. He is an outstanding sprinter who will quickly take you to your destination.

- Tyrannosaurus Rex: A fierce animal. The tyrannosaurus will make you the most feared animal in Empire of Dream. On his back, no one will dare to bother you.

- Argentinosaurus: If you like to stand out, Argentinosaurus is for you! This colossal dinosaur is one of the biggest beasts that Empire of Dream has ever had. It is so large that it can carry up to 5 characters on its back. Ideal for forming a small band of adventurers. However, you will not be able to capture it. It is only won during special events.

- Unicorn: horses known for their beauty and the magic that emanates from them. They sometimes have horse hooves, but pure breeds will have split hooves and a slight goatee on the chin. All unicorns have a long crystal horn on the forehead, the most beautiful will have opal or diamond reflections.

- Golem: giants of stone carved by a very old people and which had disappeared during the great catastrophe which destroyed the Empire of Dream in many islands. They are dangerous and aggressive when they are wild, but when they belong to an animal of Dream, they are true servants and will become the most reliable companions there is.

- Emu, moa and Southern cassowary: species of large Australian birds looking like ostriches. The Emus are more gray and close to the ostriches, when to the cassowaries, these creatures look a little more like dinosaurs and have beautiful shimmering colors. The largest size in these animals will be the moa which can exceed 500 kilos.

- Deer: these animals have several appearances, they can be red deer, or slightly smaller species such as fallow deer or ﻿roe deer﻿. They are peaceful animals who rarely seek trouble, preferring to take refuge in the thickest forests to escape danger.

- Wonderful deer: they are creatures a little more magical and rare than deer, there are two varieties: the forest kings who happen to be gigantic wood deer reminiscent of trees, and Peryton, an imaginary evil animal, half-bird and half-deer, with blue or green plumage, often two-toned. Capturing them is difficult, but owning one as a mount is a source of pride.

- Exotic shark: these sharks will have more fun aspects like whale, hammer or saw sharks. They are not easy to train and tame, but will make very good mounts at sea or on the road to the stars.

Living boat: a tall ship with a living animal head on its bow. Its size can vary depending on its age: the youngest looks like boats with a flag, the older become huge vessels with three or four masts. These mounts are difficult to capture. The older they are, the greater the difficulty of capture if.
Small: They look like a boat, they can only carry one character on their back. The level of capture is normal.
Young: They look like small ships with only one mast, there is not much room on board, but these small boats can carry two or three characters on their backs. During RP, you can take a friend or another of your characters with you on an island. Its level of capture is difficult, count at least three illustrations and a text of 1000 words to obtain it during a quest.
Adult: The maximum size, these colossus can carry up to 5 characters on his back, will have 3 or 4 mats and will be large enough to serve as accommodation for your character to store your belongings, companions and mounts. Ideal for creating a small crew and making your character a captain. Its capture is impossible, to obtain an adult ship, it will have to be won during special events.

- Dragon: dragons are among the most difficult to capture mounts due to their ferocity and fierceness. But the size of some of the larger subjects will allow your character to take two friends with him on a trip on islets. Dragons can have the European shape of a dinosaur shape with wings, or the long Asian shape like a snake. There are also marines adapted to the water with fins and gills.

- Griffin: the griffin is a majestic animal with a bird's head such as the eagle or the owl, wings and a lion's body. They are powerful and very difficult to tame, however your character will be admired by all if he manages to catch one of these fabulous creatures.

- Kraken: animals that dream of a kraken as a mount are rare, because this giant octopus smells awfully bad, has a slimy body, and is quite slow to transport its owner. She can also take one or two friends on her back to take them to a new island with you, but it is not certain that your friends may want to ride on a rather dishonourable creature. However, you will not run the risk of getting into trouble with such a terrifying monster, even dinosaurs will run for their life at his sight.